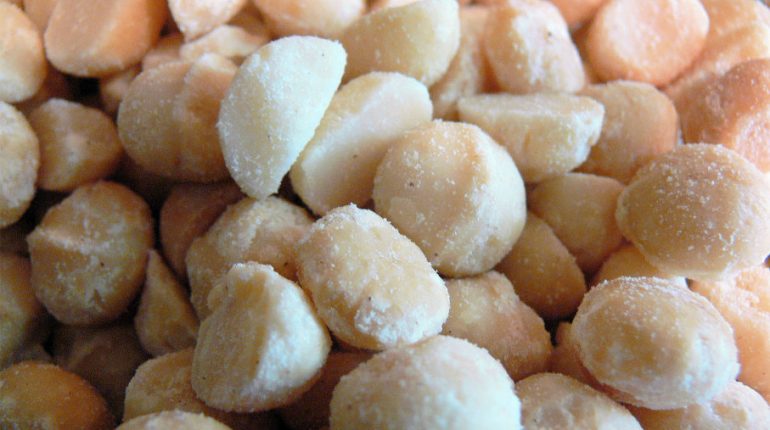 ORIGINAL ARTICLE : https://recipes.howstuffworks.com/macadamia-nuts.htm
Macadamia nuts are the most expensive nuts in the world per pound. JESSICA MERZ/FLICKR (CC BY 2.0)

Perusing the gift shop at the Kona International Airport on the Big Island of Hawaii, I searched for just the right box of macadamia nut treats to show my family I was thinking of them during my Hawaiian spa getaway. But every box I picked up displayed a sales tag that seemed to indicate I was thinking about them too much.

In other words, these macadamia-centric goodies were way expensive. And while airport gift shops aren’t exactly known for their affordable deals, I quickly learned that these delicious, nutritious snacks are almost always on the pricey side. So what makes macadamias so costly and oh-so-addictive?

Macadamia Nuts Are Not Actually Nuts

First things first: Macadamias are not actually nuts. Yes, I know, it’s ridiculous — it’s right there in the name for goodness’ sake. But much like Brazil nuts (again — what is with these misleading names?), the macadamia is in fact a seed. And although they’ve become a signature staple of Hawaiian agriculture, macadamias are actually native to Australia.

“Macadamia nuts are originally from Australia, but much of the early research, breeding work, and quality development were done by the University of Hawaii on the island of Hawaii,” says Glenn Sako, economic development specialist with the Hawaii County Department of Research and Development. “These cultivars are suited for the Hawaii climate and do not produce the same high quality nut when grown in foreign conditions.”

Macadamias grow in clusters on trees and some processing is necessary before they can be eaten. To get to the kernel, or nut, the husk must first be removed. The kernels are then ripened and dried to achieve that characteristic crunch.

“Cultivars,” short for “cultivated varieties,” are specific types of plants selected and cultivated by humans. In this case, the plant is a large bushy tree that starts producing macadamia nuts by the time it’s about 4 or 5 years old. So how exactly did these Australian cultivars end up in Hawaii? For that, you can thank William Purvis who planted the first macadamia tree on the Big Island in 1881. Purvis didn’t initially intend for the tree nuts to be a hit; he planted the trees as windbreaks for the sugar cane fields. The plants were functional and also happened to be quite pretty, but no one suspected they bore such delectable and profitable fruit.

A couple of decades later, the Hawaiian Agricultural Experiment Station (HAES) was established to get new crops growing on the islands since the newly established United States territory was relying almost exclusively on sugar following the collapse of the coffee market. In the 1920s, the government offered a five-year tax exemption on land that was used solely for macadamia production, but most farmers weren’t interested. That is, until roasted macadamia nuts started popping up in stores and consumers went wild. Demand for the nuts went up and the number of trees planted for nut production grew from 423 acres (170 hectares) in 1932 to 1,086 acres (440 hectares) in 1938. Sales slumped a bit after that, but by the 1950s, Hawaii was churning out macadamia goodies to snack fans throughout the world, and major companies were making a pretty penny off them.

Why Are Macadamias So Expensive?

While macadamias clearly have an interesting past and they taste heavenly coated in thick layers of chocolate, do they really merit their often exorbitant price tag? After all, at around $25 a pound, they’re considered the most expensive nuts in the world. So what’s the deal?

“They are expensive because they are regarded as a ‘dessert nut’ versus a commodity crop like almonds,” Sako says. “They are not raised on the continental U.S. so the acreage is limited.” In 2018, macadamias made the news for a 17 percent price increase, which Sako attributed to Hawaii’s fixed harvest acreage and a higher global demand.

“It takes seven years for a macadamia nut tree to produce a crop,” Sako says. “Demand remains high and prices are up to $1.20 per pound. Despite this, there is tremendous pressure on the industry. The agricultural labor shortage continues and that has caused wages and benefit costs to increase. Invasive pests such as the macadamia felted coccid continue to affect the orchard health and production. The Hawaii land prices are so high that orchard expansion is too costly and producers cannot wait for seven years. Therefore the production acreage remains steady, despite the increased demand for the nuts.”

Are They Actually Good For You?

High-fat foods used to be the most demonized of all kitchen staples, but thanks to current research and slightly less hysteric marketing hype, such things as nuts, oils and seeds are getting their due as healthy options.

“Macadamia nuts are high in monounsaturated fats, low in net carbohydrates and a good source of copper, manganese and thiamin,” says registered dietician Danielle Bertiger, MS, RD. “Monounsaturated fatty acids have been shown to lower LDL cholesterol levels (the bad kind), especially when they are used in place of saturated fats and refined carbohydrates in one’s diet. Net carbs are important to consider because it clues you in on how much fiber something contains in relation to the amount of total carbohydrates present. Having more fiber is crucial to gut health. Copper assists with iron absorption and transport in the body while manganese and thiamin are essential for carbohydrate metabolism.”

And while all that sounds great, we still live in a society that tends to obsess over numbers. So at 203 calories and 21.4 grams of fat per serving (a serving is about 10 to 12 nut kernels — i.e., pure nut not doused in chocolate), are macadamias really a wholesome snack?

“Although nuts are high in calories, they are also packed with fiber, heart-healthy fats, protein, vitamins and minerals essential to our diets,” Bertiger says. “Having a small handful is a filling and nutritious snack to tide you over between meals or can be used as a way to round out a meal (i.e. on top of a salad or yogurt bowl). They are a particularly good substitute for packaged ultra-processed snacks like potato chips. Calorie for calorie, an ounce of chips and an ounce of nuts are equivalent, but the protein and fiber in the nuts will keep you energized, full and focused.” 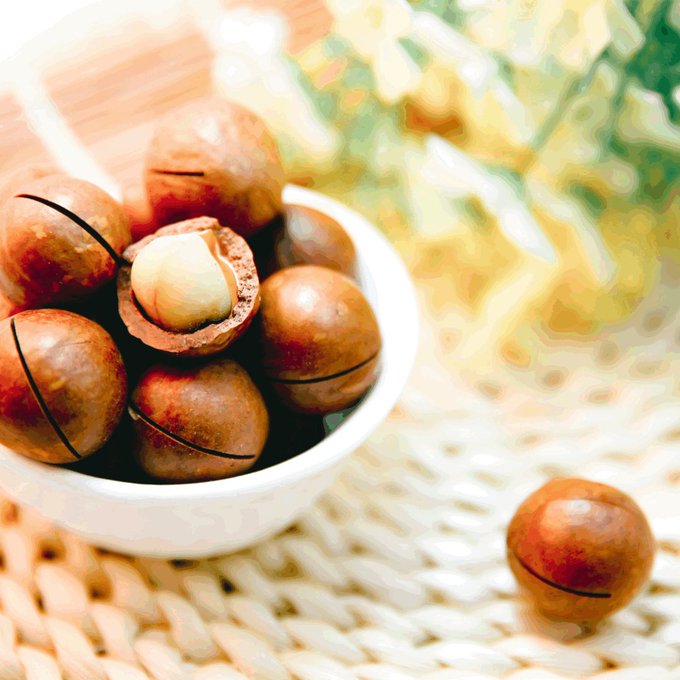 See Kristie Leong M.D.’s other Tweets
And even without the chocolate layer, macadamias have a distinct flavor profile that will likely keep you satisfied. “The delicious taste of the macadamia nut is due to its high oil content of 72 percent,” Sako says. “Processors can determine the oil content by a float test — a nut with 72 percent oil will float. If the oil content is less than that, it will sink and be disposed or used another way.”