SAMAC Fact Sheet: The Importance of Monitoring For The Macadamia Felted Coccid by Dr Schalk Schoeman

Effective monitoring is the first line of defence in any insect management programme. For crop protection to be effective, it is important that commercial pests are accurately identified. Due to the current chemical biased pesticide spraying regimens on many farms, it is not uncommon to encounter many secondary pests (insects attaining pest status by the killing of their indigenous natural enemies with indiscriminate spraying). Many of these pests are scale insects and it is often very easy to locate scale insects in some part of a macadamia tree and/or orchard. For the lay person these insects all look very similar and it is easy to confuse lesser important species with commercial pests (Fig 1B). Secondary scale pests rarely affect all above ground parts of the trees (trunk, branches, nuts, leaves) simultaneously. The macadamia felted coccid is an exception as it commonly occurs on all plant parts except the roots. When it occurs on the leaves, they normally settle along the midribs and margins (Fig 1).

Figure 1. A: Typical infestation pattern of the macadamia felted coccid on a macadamia leaf; B: Unidentified scale insect affecting mostly the branches and twigs.

Apart from the presence of the insects on the trees, early infestation symptoms include senescence of leaves in the insides of the trees (Fig 2A). If left untreated, these symptoms quickly escalate leading to dead branches (Fig 2B) and finally to large necrotic sections on affected trees (Fig 2C). These necrotic areas do not recover and contribute to general yield loss associated with this insect.

The macadamia felted coccid is sexually dimorphic (males and females differ macroscopically). Females can be differentiated from other scale insects affecting macadamias by the felted cover and the conspicuous opening at the posterior (Fig 3A). Most other female scale insects are roundish without this characteristic opening (Fig 1B). Coccid females are whitish in colour after their final moult and turn pale yellow as they age. Males have wings and emerge from the scale-like covers after the final moult (Fig 3B). The male scale covers are slightly smaller and slenderer than those of the females but without the opening depicted in Fig 3A. The posteriors of male coverings are normally perforated where the insects have emerged and should not be confused with predator or parasitoid feeding and/or emergence holes. 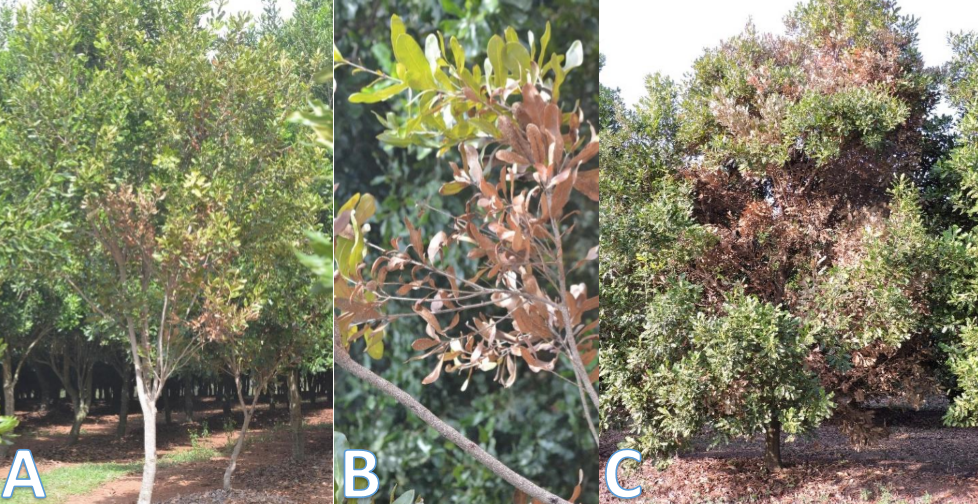 Monitoring techniques
These insects are normally abundant during autumn and winter and are often very difficult to locate in spring and summer especially after a chemical treatment. It is therefore understandable that the same monitoring technique will not be effective during off and on seasons. During autumn and winter, it is very easy to monitor the activity of crawlers (immature stages) with inverted duct tape tied around main scaffolding branches. When moving about, crawlers simply adhere to the sticky side of the tape and can easily be counted every week. This is particularly worthwhile if one wants to determine the efficacy of a control treatment as it is not easy determining if sessile (immobile) adult female insects are alive or dead.

Unfortunately, the sticky tape technique does not really work well during the summer when populations are low. The macadamia felted coccid is very heterogeneously distributed and little information is available regarding host plant selection. If the main dispersal methods (wind and mechanical by means of infested plants, infested clothing or machinery) are considered in conjunction with the sessile nature of the insect, then the only logical conclusion can be that host plant selection is probably a totally random event. Typically, single trees in orchard normally become infected which supports the random dispersal theory. During this time alternative monitoring techniques are required, and the following are suggested: