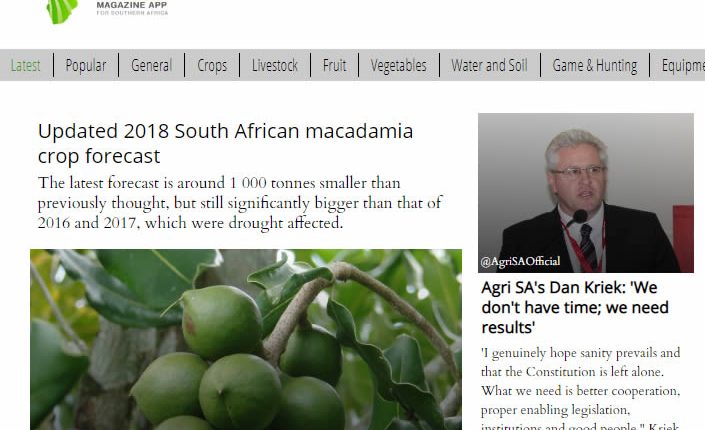 The latest forecast is around 1 000 tonnes smaller than previously thought, but still significantly bigger than that of 2016 and 2017, which were drought affected.

Macadamias South Africa NPC (SAMAC) conducted another round of data collection to issue a final crop forecast for the 2018 season. The latest forecast is approximately 1 000 tonnes lower than the previous forecast of 53 500t, measured on an inshell basis at 1,5% kernel moisture content. The updated forecast is 52 412t. The 2018 crop is still a significant improvement on the previous two season’s crops of 38 000t and 44 610t for 2016 and 2017 respectively, which were severely reduced due to a drought period.

Table 1. Macadamia Production (tonnes) in South Africa for the past three seasons per province.*

The kernel market is also gaining more prominence than what was previously expected. Up to 65% of the South African crop is expected to be processed to kernel. This is 10% more than a previous estimate and also 15% higher than 2017, when 50% of the crop was exported as in-shell.

Van der Westhuizen also commented on the quality of the 2018 season crop: ‘A record crop to ensure sufficient supply, with an added bonus of excellent quality was what the market was looking for. South African macadamias have attained a superb reputation, which is appropriate, since we are the largest supplier of macadamias in the world currently.

‘The current season is drawing to a close fast with the last deliveries reaching many handlers in mid-September. Flowering has commenced and is looking promising. It is however too early to make predictions about the 2019 crop since much depends on weather conditions. Flowering is unfortunately a poor indication of crop outlooks, since nuts drop naturally towards the end of spring, a phenomenon referred to as the ‘November drop’.

Furthermore, the prospects for El Niño is also a possibility, based on recent weather predictions. Nut set on flowers depend on water supply, humidity and other factors, while trees’ ability to hold on to the nuts depend much on water supply.’

*Production figures per province are estimates only on an inshell basis at 1,5% kernel moisture content.